Earlier this year we were approached by a web development company. It turns out their client’s website needed some updated 360 content (specifically street view in this case). Their client (who will remain nameless) had some Google Street View photos taken a few years ago. Even by their standards, it was pretty sub-par. To people who are not exposed to 360 photography, it might not be so obvious. To someone who works in 360 all the time… well let just show you. Today we are looking at amateur 360 Photography and what to look for.

Below is a 360 example of the more common types of issues you see on Google Maps / Street View Photos. I do not like the idea of point out peoples bad work on Google Street View, so this was created to show you exactly goes on all the time. I marked the issues in red. There are issues on the very top and bottom as well.  Simply scroll down the page to read more about it.

A beautiful scene plagued with many issues and glitches

When you combine images to make a 360 panorama, they require “stitching” this is the process that blends all the photos together. We mostly see this on smartphones and amateur DSLR photographers. This is where the stitching is so bad you have scenes out of joint, if people walk past then part of their body goes missing and so on. Also, take a look at the palm trees where the two people are sitting. Bad stitching is the most common issue for amateur 360 photography.

Take a look around at all the issues in the example above. There are just many stitching issues that make it look like a giant jigsaw puzzle. It kind of looks like you are in that movie Inception starring Leonardo Di Caprio and reality is breaking down around you. 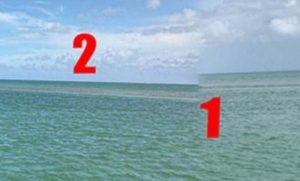 To prevent vertigo and other disorienting factors when making a 360 photo/video you need to have the camera aligned correctly. If you don’t, it can feel like you are about to fall over. There is one example of this where the water looks like you looking at the water while standing at a complete angle. As a result, many people with smartphones and selfie sticks are usually the reason for this happening and a good example of amateur 360 photography.

As mentioned a complete 360 photo combines many photos together, and many factors must be taken into account. One factor that must be taken into consideration when you merge the photos is that the lighting must be consistent. The reason for this that the photo needs to be seamless and be a smooth experience throughout.

The below photo is an example right at the top of the photo (but also appears on the bottom. As you can easily see the separation colour tones from the centre (top and bottom of panorama). This is because while the photo was stitched together the discrepancy in the image was not accounted for. This gives off the feeling of a segmented 360. This can also happen a lot when one side has the sun facing the lens, and the other side is in a room. If not accounted for correctly it can cause obviously lighting issues. 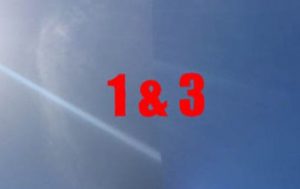 4. Camera In The Photo 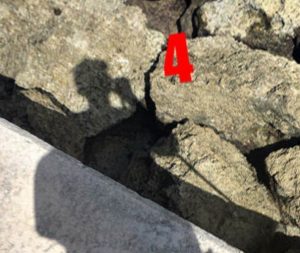 Smartphones are great, but if the individual photo taken to create the photo is not accounted for, then spots will appear out of focus. The best example is in the panorama, specifically in the trees. As you can see part of the branches are blurry due to focusing issues. 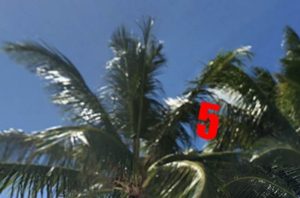 Photo Out Of Focus

Because a 360 photo is made up of many photos, the process is quite complex and can cause issues. Most of the time the primary culprit is point 1 (Bad Stitching), but there are also other issues that can be created. In this case are random anomalies. In the photo, there is only one issue of this pointed out. The glitch could have been edited in post-production but was left in there. 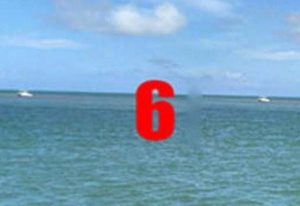 One of the worst offenders of amateur 360 photography is a super low resolution. This is normally the culprit of people using their smartphones. We hear clients say at times “yes our Intern James told us he could take 360 photos with his smartphone”. These normally have a few major flaws, but the main one is that the photos are blurry (also badly stitched) which is shown below. Smartphone cameras while constantly improving are no match for professional DSLR camera optics. The same is definitely true about professional 360 cameras and equipment. While they can do the job technically speaking it is not on the same level of quality.

In the example shown, the image resolution is not very high and was processed at 3K resolution. While it sounds impressive the face is that 4K+ (realistically 8k) for photography is considered the norm. More about that can be explained in this blog Differences In 360 High-Resolution VS Low Resolution. While the panorama is in a beautiful place, it is also blurry due to all the stretching. It may not be so obvious on screens smaller than 4k resolution. Unfortunately for me, I edit on a 4k screen, and the blurriness is to the max. A lot of my client’s demand high-quality imagery and I exclusively produce content in 8k or higher resolution (8k is four times that of a 4k screen).

Ghosting is when you have strange anomalies when you stitch a photo that can look like a “ghost”. This is when someone walks past, a car driving or any movement between the lenses that causes this distortion. While not in this shot it really ruins the 360 experience. A professional 360 photographer or videographer will edit their work to make sure this is not shown in their work. Really bad ghosting can make a photo look like a garbled mess.

Furthermore, 360 imagery is literally a surround experience. Every angle must be taken into account when shooting 360 for your business. This is why you need a professional and not an amateur. The above examples were shown to showcase examples of publicly listed works on google street view that are quite common. If you are getting some 360 work done take a look at their portfolio. Know what you are paying for. Contact us today by filling out the contact form on this page or give us a call.

What are your thought of this list? Is there anything I should mention in this amateur 360 photography quality? Have you had any 360 photos/video done for your business and noticed things after they were published? Join the discussion and let us know in the comments below.