So you are on the phone with a salesperson, and they say “We shoot in 4k for our 360 photos and video”. To most people, it sounds impressive, but the simple truth is that it is just not good enough for 360 content. It is actually considered to be low-resolution by 2018 standards or at least the last couple of years. Let me explain the differences in 360 photo and video quality. Most people have an HD TV at home, and some even have a 4K (UHD) screen. These produce stunning image quality for your viewing pleasure as some would call them home cinema experiences. Today lets explore and make sense of this all.

Let’s Show You The Difference

Take a look at the 360 example below. As you can see that you are only seeing PART of the whole image. This means that the image is stretched to fit your screen and will actually be warped and stretched. As a result, you will have a very low-resolution look and feel to it.

If taken with anything from 4k or lower on any screen it will look stretched and blurry. It will seem amateurish and on professional which will not represent your brand well. On a side note, the image sensors in an 8k 360 camera are always better than a 4k camera. So if you decided you need only 4k content the image quality will look better when shot with a native 4k camera. 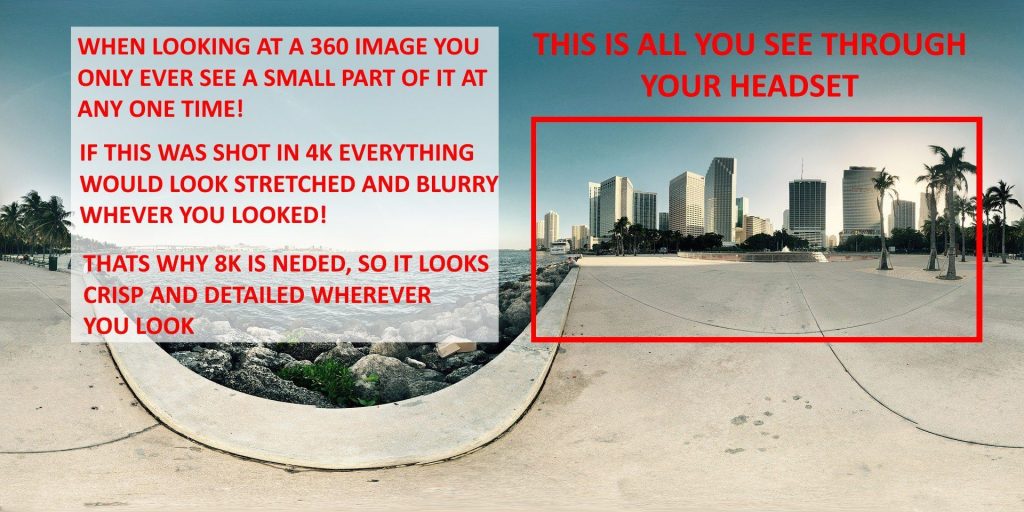 The rule of thumb I tell our clients is as follows. If you want to show your content in 2018 and beyond it needs to be at a minimum of 8k. Do not just take my word for it but let me show you the differences in 360 by showing you two 360 panoramas side by side.

The 360 photo on the left is 8k (high resolution), and on the right, I scaled it down to 4k (low resolution). Feel free to double click either of them to make them full screen and look around. You will see that from a standard screen to a high-end screen the image on the left which is in 8k quality looks crisp and amazing compared to 4k.

Notice the fine details of the flowers and leaves. You will notice that on the 4k it’s blurry and the fine details are all washed out. This is especially apparent if you zoom in on the image.

So, when someone calls you for a 360 photo/video shoot ask them if it will be on 4k or 8k. Since people are buying 4k TVs and computer screens, you might as well future-proof your images. This way you will not have to redo them in a couple of years time.

If you are looking to have some 360 content produced for your business feel free to check out our 360 photos and 360 videos. Contact us, and we will show you the massive difference in quality.

Can you tell the difference between low and high resolution 360? Did you have any 360 work done for your business and was it in 4k or 8k? Join the discussion and let us know in the comments below.